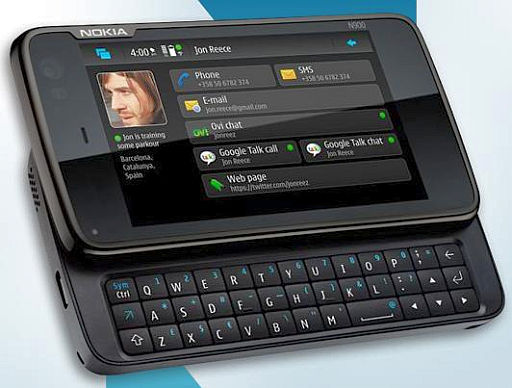 In all the current excitement and hype about Android and the Apple iPhone and iPad people have seemed to lose sight of Nokia, this is a very silly thing to do. Nokia make about 40% (actually 39% last quarter) of all the mobile phones in the world, compared with Apple’s 2%. Nokia has 123,000 employees to Apple’s 35,000. Of the 52 million smartphones sold in the world in the last quarter 21 million came from Nokia, a 40% market share.

In the gaming world everyone remembers the Nokia failure that was the original nGage. They forget that Nokia Snake is on more machines than any other video game in the world.

Who owns the smartphone market is headed to become the most important factor in all of technology for the foreseeable future. To explain why we need to go back to Moore’s law (again). This says that the number of transistors on a chip doubles every two years. Compound. This means that a given chip halves in cost or doubles in power every two years. This is easy to see in the price and capabilities of the game consoles, mobile telephones and computers we use every day.Other, lesser, components are not governed by Moore’s law. But we are at the beginning of a display revolution that will see complex, power hungry LCD displays replaces by simple, cheap, elegant OLED displays, which will drop prices further and faster.

There are companies that tear down these electronic devices to work out how much they cost to manufacture. Currently this is around $180 for a top end smartphone. So in 24 months time this could be $90. And due to the compound nature of Moore’s law this would be just $22 in 6 years time. You can see that at this price non smartphones have had their day. All new phones will be smartphones. And we are talking about a billion new phones every year.

A billion new smartphones is a billion new computers connected to the internet. It is also a billion new gaming machines. Every year. This is going to be revolutionary. It is going to put so much power and so much capability in the hands of so many people. It is going to totally dwarf the computing power in all the world’s desktop computers and it will make game consoles look like a small sideshow. It will be the biggest democratisation of knowledge and the means to use that knowledge in human history.

So if Nokia can hang on to owning 40% of this they will be the biggest computer company on earth. And if you look at what they are doing right now there is no reason why they won’t. They may lack the showmanship of Steve Jobs but they are more than making up for it with great products that people want.

The N97 Mini is a very well made, very well featured evolution of the less than stellar N97. With a fold out keyboard it can take some serious use and it represents serious value for money. The 5800 has been honed by Nokia to be a brilliant non keyboard smartphone and is available both with or without the XpressMusic service. And the new N900 is a fantastic, fully featured top end smartphone. These three devices (and others) are why Nokia can command a 40% smartphone market share and must be giving their competitors sleepless nights.

It is not just the hardware. Nokia are covering their bets by having two different operating systems. Symbian is now open source so expect more rapid development to build on it’s ten years of development that make it the most fully features smartphone OS. Which is why it is on more smartphones than any other OS. Maemo is also mostly open source. It is a clean sheet of paper, state of the art, linux based OS and it is what drives the new N900.

Ovi is the online portal for Nokia smartphones, it is an App Store, an iTunes, a Google Maps, email, file storage and sharing service and so much more. It is where nGage now resides. Ovi is the most comprehensive suite of online services currently available for a smartphone.

Previous Post: The Wii is dead. What will Nintendo do?
Next Post: Sony and PS3. Looking good