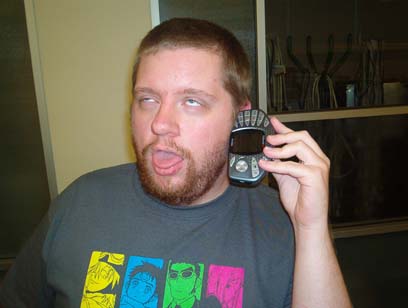 You would really expect mobileÂ telephones to be the most popular gaming platforms in the world. Just about every person in the developed world carries one for all their waking hours, and even in the developing world a surprisingly high percentage of people are now owners. 1,144 millionÂ mobile telephone handsets were shipped in 2007.Â  This dwarfs the numbers of all other gaming platforms put together. And since most phones now include cameras and many include MP3 players this has the unexpected consequence of making Nokia the largest manufacturer of cameras and digital music players in the world. Beating Kodak and iPod respectively.

Mobile phones have all the attributes of a games machine: a screen, memory, processing power and an input device. They also have the advantage of connectivity. So it is of little surprise, given the sheer numbers, that the most distributed and the most played game in the world today is Snake on Nokia handsets. Yet this is a false beacon because mobile phone gaming is a very tiny fraction of the size that it should and could be.

There are two main problems. The first is that there is no standard. Every phone model is different and there are many thousands of different models. So a game publisher has to make very many different versions of a game just to have a game work on the most popular handsets. The second problem is that a publisher needs to deal with hundreds of different airtime companies in order to get any game distributed. So the market has two layers of fragmentation. This has destroyed the potential of this immense market in waiting.

Nokia are a very clever company. You don’t get to make 40% of all the world’s telephones and have an annualÂ turnover of 51 thousand million Euros without being very special indeed. They saw that the enormous revenue potential of gaming was passing them by. So they came up with a solution to the two problems. They created a standardised gaming phone, called the nGage and they put the games onto memory cards, bypassing the airtime companies. They probably thought that they had cracked it.

In 2002, with rumours of nGage rife, I went to Espoo, outside Helsinki, to Nokia corporate headquarters with Jim Darling, chairman of Codemasters. There we met the senior management of the team behind this new gaming phone. They showed us a prototype and there were several obvious flaws in the design. But they told us that the nGage feature set would be rolled out in a whole range of Nokia handsets. They were sitting on the potential of producing the most popular gaming machine in the world.

But they made just about every mistake it was possible to make. nGage became a joke subject (it was called the Taco)Â and it flopped, selling just three million units. Despite excellent games like Pocket Kingdom : Own the World and Pathway to Glory.Â

Now Nokia have come back with a completelyÂ new nGage, which has nothing in common with the old machines. This time it is a software standard that looks amazingly like Xbox Live, which cannot be a bad thing. And it will run on lots and lotsÂ of different handsets. Despite the bad reputation of it’s predecessor it is receiving rave reviews. So maybe at long last mobile phone gaming is going to realise it’s potential to be the most popular platform.

Of course this time Nokia aren’t going to get it all their own way. The Apple iPod Touch and iPhone have all the attributes necessary to be excellent gaming devices. And in iTunes Apple have an established global content distribution system. Not only is the potential there, but also the will. Apple have started publishing games and are distributing SDKs (Software Development Kits) to developers all over the world. I have been thinking that this would be the fastest growing gaming platform in 2008. But now nGage may be.

So Apple and Nokia will be making many tens of millions of pocket devices that are phones, and MP3 players, and cameras and gaming machines. And with each (frequent)Â generation they will get better and better. ThisÂ will have a big effect on the market for the dedicated portable gaming machines, the Nintendo DS and the Sony PSP. Both desperately need a redesign to keep up. And the biggest question has to be Microsoft. Are they going to upgrade the Zune to compete? Nokia are a very big and very clever competitor to take on, even for Microsoft.