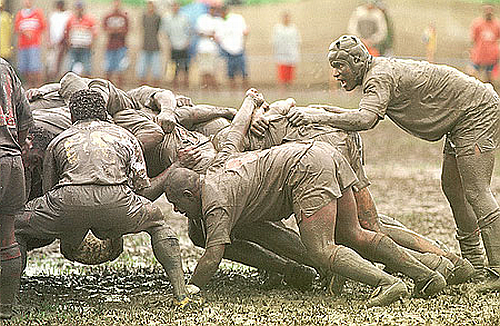 30 years ago commercial videogames for home computers arrived in Liverpool when I brought a pile of Apple 2 games to Microdigital that I had bought at Computer Components of Orange County in California.Â  A couple of years later, in Liverpool, Bug Byte software was set up, one of the very first British video game publishers. From this, also in Liverpool, there came Imagine, Software Projects, Psygnosis, Denton Design, Jester Interactive, Bizarre Creations, Rusty Nutz etc

Then in the mid 80s I worked at Codemasters, just outside Leamington Spa in the centre of England. From this there are now has a whole pile of gaming companies in the area. This is not something unique to the gaming industry. It happened with shoes in Northampton, with bicycles in Coventry and with pottery at Stoke on Trent.

There are now lots of game development clusters around the world, usually created in the fallout from just one pioneer. In the UK we have cluster in Dundee, Guildford, Brighton and several more. In China there is one in Shanghai of at least 20 companies as a result of Ubisoft being there. In America there are lots of clusters, Austin, Texas has very many game companies as do Los Angeles, Seattle and Boston. In Canada Toronto and Montreal have grown quickly as the locations for many companies. And Seoul, Korea has around 60 companies.

From the point of view of a developer there are many advantages doing business in a cluster. The human resources and services are all there, geared up just right for running a gaming business.

From the point of view of an employee there are many advantages to working in a cluster. Job mobility without moving house and security of employment being significant advantages to anyone.

But a further advantage of clusters can be found in the pages of Adam Smith’s 1776 book, The Wealth of Nations. A cluster will support the division of labour with specialist companies forming to service the industry. For gaming this could be sound, QA, translation, motion capture, marketing and other technical services which make doing business in the cluster more flexible and effective.

And then there are the politicians. Political attitude has a huge bearing on the success of a company. So it is vital for a game business to nurture local and national politicians as well as the civil servants who do their bidding. When an industry employs several thousand people in one location it can exert considerable political power to its advantage.

This is just one reason why companies within a cluster should co-operate, even if, as is often the case, there is previous bad blood arising from business dynamics. The businesses have many areas in common that can be addressed more effectively jointly. There should be CEO level meetings of every company within a cluster every month.

And, of course, government can leverage these clusters to generate national wealth, something we have seen the Canadians do with startling success and something the British government has failed abjectly at. The game industry is already worth many tens of billions of pounds in economic activity and will grow to be a lot bigger still so this is of critical national importance.

Previous Post: Game sales down by 18%
Next Post: Kingory, Nap War, Evony, Empire Craft, Lords Online. What is going on?