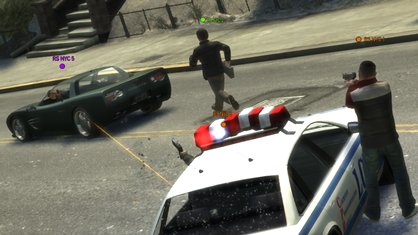 Yes it’s true, violent games cut crime. The exact opposite of what Hillary Clinton, Gordon Brown, Jack Thompson and a myriad of opportunist ignorant journalists have been saying. This is the finding of Patrick Kierkegaard of the University of Essex in report in theÂ International Journal of Liability and Scientific Enquiry.

“Violent crime, particularly among the young, has decreased dramatically since the early 1990s, while video games have steadily increased in popularity and use.” “With millions of sales of violent games, the world should be seeing an epidemic of violence. Instead, violence has declined.” Obvious truths that politicians and journalists choose to ignore.

“However, it is possible that certain types of video game could affect emotions, views, beahviour and attitudes”. “Similar to books, video games permeate a person’s life and will likely interact with numerous other factors”.Â  It’s nice to see someone at last realising that games are just another form of popular entertainment media. It is about time that politicians and journalists also realised this.

I have always thought that games act as a catharsis, as way for people to let off steam. This is suppored by anecdotal evidence in Grand Theft Childhood and by this new report. But obviously the effect of games on people can be complex, depend on a whole load of other factors and vary widely between individuals. In his report Patrick Kierkegaard says: “Computer games can, of course, lead to violent behaviour under certain circumstances â€“ such as triggering aggression in certain people that are already predisposed to violence.”Â It seems thatÂ the door is open for a lot more research.

A very interesting point is that this report has been very lightly covered by the British media. If it hadÂ concluded the opposite it would have been all over the front pages.