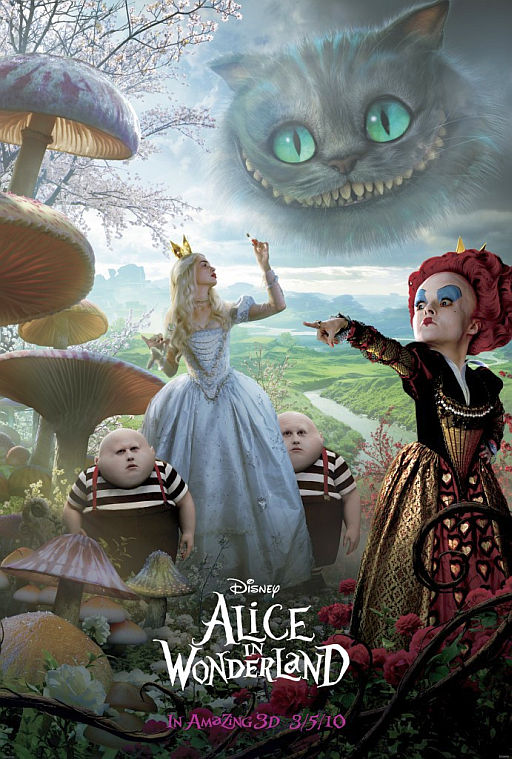 The guys that do the marketing for the big Hollywood studios know what they are doing, the games industry is in the dark ages by comparison. And movies have suddenly found a great strategic advantage over other entertainment media. One that is more than working. It is packing them in.

Stereoscopic 3D using polarising glasses is the hottest thing since the talkies. Avatar, which I have already written about, is the biggest grossing film in history. Yet now Alice in Wonderland out grossed Avatar in its first UK weekend. Cleverly Alice leverages the Johnny Depp brand to appeal to a different demographic to Avatar, so my wife liked it.

Obviously part of 3D is hype, marketing and the usual human/lemming behaviour. But part of it is also a step change in the immersive experience. The ability to suspend disbelief yet further.

Before Alice screened they showed a whole pile of trailers. All for blockbuster films and all 3D. How to Train your Dragon, Shrek Forever After and Toy Story 3 are destined to be surefire hits. It is a new golden age for the movie industry. The only caveat is that these are all Computer Generated Imagery (CGI) films. It will be impressive when Hollywood delivers a non CGI 3D blockbuster.

Whilst the movie industry has a lead in this jump to 3D it will not be for long, TV manufacturing and broadcasting are both heavily committed to it. Televisions are a commodity product, a rectangle of moving image. In recent times manufacturers have tried to use size as a differentiator. But you can only go so far. So currently in the market they are using thinness, which is not the sexiest of USPs. This makes 3D a very tempting technology to help maintain manufacturing margins. So the manufacturers are jumping in with both feet. Soon the market will be flooded with 3D sets and all those big flat screens sold over the last few years will be obsolete.

Time now for a brief technical interlude. Stereoscopic 3D works by fooling the brain. To do this it feeds a different image to the left eye and to the right eye. This is why you need to wear polarised glasses in the cinema, each lens is polarised in a different direction to only let through the right imagery for its eye. So the cinema needs to project twice as much onto the screen to maintain the same quality as 2D films. This is why the whole industry has invested a fortune in re-equipping.

Which brings us to video games. I reported on 3D gaming last year and again earlier this year. It definitely provides a compelling experience. But it requires us to put twice as much information on the screen if everything else about the game remains the same. But our current generation of consoles just don’t have the spare capacity, they are already working at full stretch to deliver the current crop of 2D games. Moving to HD was a big jump for the gaming industry and 3D is yet another big jump without much of a breathing space in between.

So every PS3 and 360 game developer now has a choice. Either create spectacular 2D graphics or go 3D with a lesser graphics quality. There is only so much processing power available and they have to decide what to use it on. This puts us a long way behind the movie industry who have already re-equipped to deliver the highest quality images and 3D at the same time. We are going to have to wait for PS4 and Xbox 720 to really do 3D properly.

Sony and Microsoft have different attitudes to 3D. It looks like Sony are betting the company on 3D. Every division and every product that can embrace it is doing so, big style. Televisions, movies, camcorders and of course, video games. This summer Sony are releasing a systems update for the PS3 to optimise it for 3D games. This can’t add in the power necessary to do the job properly, but it is a viable stopgap. If 3D continues to take off in the public perceptions this could give Sony a big strategic advantage.

Microsoft’s attitude is far more wait and see. They obviously feel either that 3D is a fad or that current technology isn’t up to the job of doing it justice. Or maybe even they are so tied up with Natal that they simply don’t have the resources necessary to do 3D. It is a big nuisance that two paradigm shifters like 3D and gesture interfaces should come along at the same time.

So let’s look at what this all means. If 3D really is our future then it is advantage Sony, in a big way. 3D is embedded throughout the corporation. If 3D is a fad then it is advantage Microsoft, they won’t have wasted resources chasing a rainbow. What is absolutely for sure is that it has accelerated the release of the next generation of platforms. We suddenly need the extra horsepower that Moore’s law always delivers for us in new machines.