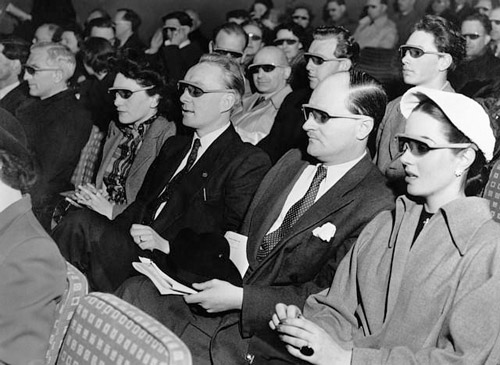 Last night at the IGDA meeting in Leamington Spa I saw a presentation and then a demonstration of 3D gaming from Andrew Oliver and Aaron Allport of Blitz games. Most of us are familiar with old B movie 3D, with cardboard blue and red glasses. Well technology has moved on a long way since then and we are at the cusp of it going mass market.

Just now the movie industry is producing 3D films at an unprecedented rate. Partly because they now can, with digital distribution and digital movie projection. And the TV manufacturing companies are switching to a variety of 3D technologies in their latest models. So there is a groundswell out there and gaming will be a part of it.

Blitz have developed proprietary 3D software that enables 3D games to work on the Xbox 360 and Playstation 3. There were a number of hurdles to overcome in the sheer amount of information that needs to be delivered to the screen, so these consoles are being stretched to their absolute limit. It is only with the next generation of consoles that the power will be there to do 3D easily and well across all game genres.

The 3D game I saw was using active glasses and was far more effective than the old coloured lens technology. And the results were deeply impressive. It was like going to the theatre having only previously seen the cinema. The whole experience was vastly more immersive. And as this is one of the things we strive for in gaming Blitz would appear to be on a winner with their technology.

I am told that the journalists who have tried this have written it up very positively but then their readers have responded with very negative comments. This is because you really are in no position to form a judgement on the experience till you have tried it yourself.