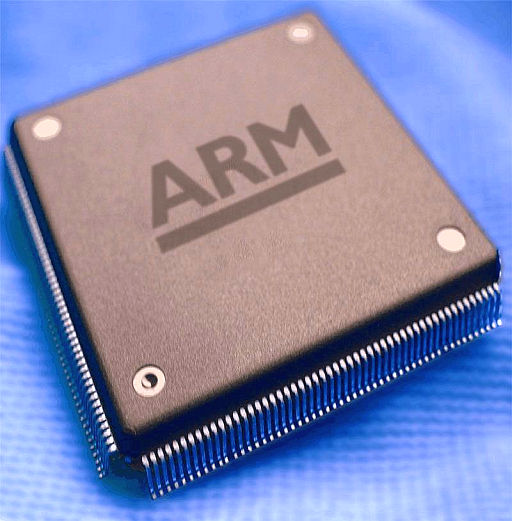 You may never have heard of ARM microprocessors, but you use many of them every day. They are in virtually every mobile phone and every PDA made, there are lots of them in every car, running systems like airbags, fuel injection and ABS, in fact they are embedded in most of the world’s electronic devices. Many billion of them are made every year, 90 are made every second.

And they are one of the cornerstones of the technology that makes video gaming possible. They are in the Sony PSP and the Nintendo DS, they power the iPod Touch and the iPhone and they control many of the world’s hard drives and internet routers.

ARM is an acronym, with another acronym inside it.

A stood for Acorn, a British manufacturer of home computers between 1978 and 1998. Successful models include the Electron, BBC Micro, Archimedes and the Atom. The earlier machines used 8 bit 6502 processors, but when Acorn wanted to create a graphics user interface the 6502 was not powerful enough. They discovered that a class of students in America had designed their own processor, this emboldened Acorn to do likewise. It was largely designed by an engineer called Sophie Wilson and was made as simple as possible for a 32 bit processor with just 30,000 transistors. And in 1987 it went into the Acorn Archimedes.

In 1990 the A changed from representing Acorn to representing Advanced when the processor was farmed off into a separate, new company, Advanced RISC Machines Ltd, jointly owned by Acorn, Apple and VLSI technology. When they went public in 1998 they changed their name to ARM Holdings because they thought that the investing public would not put money in a company with RISC in its name!

R stands for RISC, as I have already said. RISC is itself an acronym, it stands for Reduced Instruction Set Computer. This does what it says on the tin. If you reduce the number of different instructions that a microprocessor can execute then it can execute them more quickly. This can be a big difference as each instruction takes less clock cycles (mainly just one cycle with the ARM). Also the processor will be a lot simpler, so will be cheaper to make and use less power. The downside is that you need to use more instructions in your software than with conventional microprocessors.

M stands for Machine, which is what a microprocessor is. But you need different powered machines for different jobs, so now ARM create a whole range of these machines (over 580 different processor designs) to perform everything from the simplest task to being the main processor in a portable computer.

ARM don’t actually make the chips, they license the designs out to most of the world’s chip manufacturers, over 200 separate companies make them. These people in turn use the ARM designs in a myriad of different ways, often embedding the ARM processor on a chip with lots of other components. In fact today it is not uncommon for all the components of a computer to be on the one chip, this also has an acronym, SOC, or System On a Chip.

An example of an embedded ARM is the Wii, which has one embedded in the Hollywood graphics chip, this works with the main (non ARM) Broadway processor, controlling input and output. The hidden, embedded nature of this ARM was what made the Wii system so hard to crack.

An example of an SOC is the Apple A4 chip in the new iPad tablet computer. This one chip contains an ARM Cortex-A9 processor and an ARM Mali 50-Series graphics controller with all the electronics they need to make up a complete system.

One feature of ARM chips that has made them so popular is their very low power consumption. They give the most processing power possible for a given amount of electricity. Part of this come from their fundamentally simple and elegant designs, they contain less components than the alternative solutions to getting the job done. Part comes from the fabrication techniques and actual silicon technology. And part comes from very clever power management. The speed at which different parts of the chip work is controlled to be as slow as possible commensurate with getting the job done. From flat out to total stop. This efficiency brings secondary savings when heatsinks and cooling fans aren’t required. Overall it makes them the processor of choice for any portable device.

ARM is a British company, based in Cambridge and with offices all around the world. They turn over about Â£300 million a year and employ nearly 2,000 people.