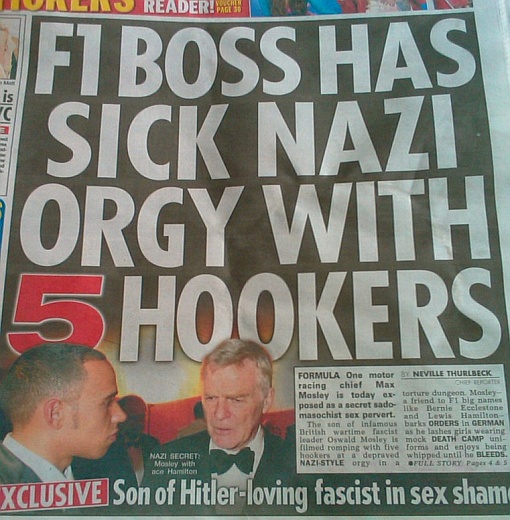 Many people in the world think that the British massÂ media is wonderful. The famous Times of London and the internationally respected BBC for instance. The reality is that things could be a lot better.

The first problem is that too much power is in the hands of one man, Rupert Murdoch. His News Corporation owns or controls The Times newspaper (they have a supposedly independent editorial committee but they know which side their bread is buttered on), the best selling daily paper The Sun, the best selling Sunday paper The News of The World, the heavyweight Sunday Times and in London the daily thelondonpaper. InÂ TV the main satellite broadcaster BSkyB and a 17.5% stake in the main terrestrial broadcaster ITV.

This makes this American citizen (he was Australian but changed because of American media ownership laws) by farÂ the most powerful man in Britain. When he tells Gordon Brown to jump Gordon asks how high. This concentration of power is ridiculous in our supposed democracy and should not be allowed.

Until earlier this year all the Murdoch press in Britain was prettyÂ anti gaming. Obviously he saw gaming as a threat to his TV empire and thus something to be vigorously opposed. The Times, in particular, had some ridiculously stupid columns from Janice Turner and Giles Whittell. Then suddenlyÂ all his media did a sudden 180 degree turn and became pro gaming. It was pretty obvious that Rupert was about to invest inÂ the games industryÂ himself. And sure enough in May thelondonpaper started a casual gaming portal. This is more important than it looks because it is a business template that can be quickly and easily re-skinned to work with any of his existing media worldwide.

Then there is the BBC, a supposedly independent public service broadcaster. The BBC was neutered by the present government with the Hutton report. This blamed the BBC for events around Dr David Kelly, a weapons expertÂ who died in suspicious circumstances after revealing that the war on Iraq was being justified on false pretexts. So the government converted telling lies to the British public into an operation to make the BBC toothless. One of the biggest victories for spin ever.Â Which is why the BBC is now commonly known as the Brown (formerly Blair) Broadcasting Corporation.Â

It is not only in politics that the BBC has got it wrong. They have no idea about video games. They don’t realise that gaming is rapidly becoming the most popular entertainment media in the world. And the proof of this ignorance can be seen in the way they persist in reporting games as technology. This is patently ridiculous. They don’t report the movies as technology so why games? I have no idea why they are doing this but it does gaming no good at all. We belong, very obviously, in entertainment. Which should give us the extent and quality of coverage that we deserve.

These example of the British media are not the end of our problems. There is also the Daily Mail, but I have written about them before.