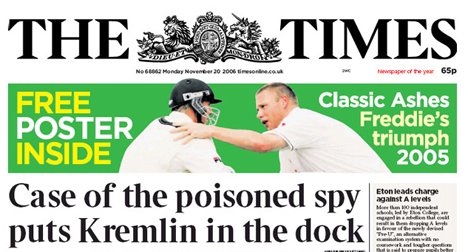 In January 2008 Janice Turner wrote a column in the Times catchily headed “Xbox is crack for kids”. In a considerable display of ignorance she said: “I refuse to buy them (her children)Â portable gaming consoles, Xboxes, GameCubes, PS2s. These are Satan’s Sudoku, crack cocaine of the brain. Even the crappiest cartoon or lamest soap teaches a child about character, plot, drama, humour, life. Playing videogames, children are mentally imprisoned, wired into their evil creators’ brains. And they play them – beepety-beep – on journeys, over family meals, any minute in which they find themselves unamused.”

Then at the beginning of April Giles Whittell proved that Janice Turner wasn’t alone in her ignorance at the TimesÂ with an article entitled “Video games: I’ll never buy one”. He shows his prejudice with: “I hate video games, on or offline. I hate the way they suck real people into fake worlds and hold on to them for decades at a time.” And goes on, “Compared with everything else on offer in a kid’s life, video games and heroin and teenage pregnancy are a colossal waste of time.”

Obviously they haven’t read Grand Theft Childhood, a federally funded study of nearly 2,000 children in America.Â This found that: “boys who didn’t regularly play video games were more likely even than boys who played M-rated (adult) games to get into fights, steal from a store, or have problems at school”.

And now the Times has joined the GTA IV bandwagon with an article which is nearly diametrically opposed to the two above.Â Â A remarkable switch in editorial stance in less than a month. Presumably they saw that the Guardian was better than them on the topic and they want to put some space between themselves and the abysmal Mail. In a lead article they say, “We are all console players now” and praise the cultural values ofÂ the game, “Opera-lovers may not know it, but the cultural event of the coming week is not the opening of The Merry Widow at the Coliseum on Monday. It is the launch, on Tuesday, in formats to suit all consoles, of a long-awaited video game that casts the player as a criminal fleeing from a violent past into an even more violent present. The game is Grand Theft Auto IV. The result of three years’ work by 150 â€œdevelopersâ€, it will draw tens of millions of users into an urban dystopia modelled closely on New York and realised in such staggering detail that the protagonist can relax between sessions spent prowling the city’s virtual streets by walking into virtual cybercafÃ©s and logging on to the game’s own version of the internet.”.

But they still have their prejudices, “It may prove unsettling and even addictive, and controlling youngsters’ access to it raises vital questions for society and, above all, parents.” And, worst of all, “But individuals need to know the difference between digital games and real life. And they must ask themselves, now as much as ever, the essential question: how do you want to spend your time here, in the real world?”. The TimesÂ needs to learn that video gaming is just another popular entertainment media. Just like the opera.Â