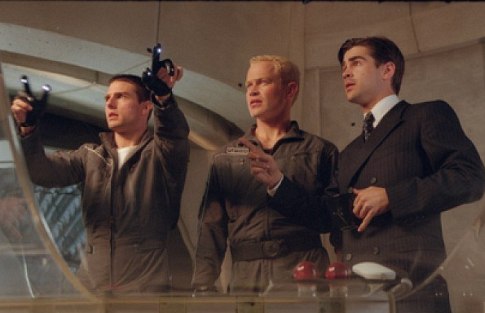 Minority Report is an Oscar nominated,Â $100 million,Â Steven Spielberg filmÂ released in 2002. Starring Tom Cruise it is set in the future, in the year 2054. It’s future view was set by a panel of fifteen experts in 1999. Â We can already look at this and see predictions they got right and those that they got wrong, such is the relentless march of technology.

One they got wrong was file transfer between computers on bits of plastic. Already (and it isn’t 2054) this is looking very dated as we have moved so rapidly to a networked world. Just looking at this film is a stark reminder of how rapidly we have become connected.

They got lots right. Biometrics using iris recognition. Use of remote, robot sensors in “combat” situations. Mobile phone earpieces. Advertising tailored to the individual. And gesture interfacing of computers, using motion sensors on the hand to intuitively control a computer through complex tasks with ease.Â A bitÂ like the NintendoÂ Wii.

However the film’s producers were unusually prescient because the motion sensing gestureÂ controller they predicted looksÂ quite a bitÂ like the leaked details of the upcoming Microsoft Newton device for the Xbox 360. Which rumours say will consist of two near identical devices worn on each hand. Just like in Minority Report.

Whichever way it was you can check out what you will (probably) be doing soon on your Microsoft XboxÂ 360 by renting the video of Minority Report.

Warning: This film contains a lot of violence. However because it is a film this only got it a 12 rating.