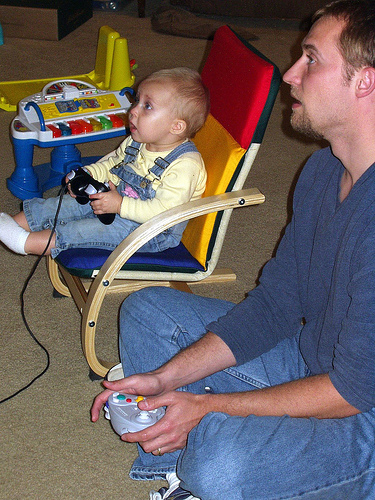 The book slipped through my letterbox on Monday and I am trying to find time to absorb it all. I have written about it on here beforeÂ and it deserves further coverage. This is because after several years research and with a $1.5 million federal budget the directors of the Harvard Medical School Centre for Mental Health and the Media have written the definitive (for now) report on children and gaming. AndÂ Grand Theft ChildhoodÂ proves that the ignorant self publicist critics of video gaming have been wrong all along. Hillary Clinton, Keith Vaz, Jack Thompson, Anne Diamond and all the others. Wrong, the lot of them.

Chapter one, The Big Fear, deals with the false preconception about gaming that many have. My favourite quote from this chapter is “The strong link between video game violence and real world violence, and the conclusion that video games lead to social isolation and poor interpersonal skills, are drawn from bad or irrelevant research, muddleheaded thinking and unfounded, simplistic news reports.”

Chapter two, Deja Vu All Over Again, looks at the development of popular culture over history and how every change has been greeted with the same sort of nonsense that games now attract. “Today we view dime novels, gangster films and comic books as fanciful and harmless period pieces. Yet in the years following their introduction, they were each labeled by politicians, religious leaders, social activists and even some health professionals as bringing down the imminent destruction of moral values, culture, the rule of law_even of civilisation itself.”

Chapter three, Science, Nonsense and Common Sense, analyses previous so calledÂ research and why it has often been wrong: “Our point is simply this: be skeptical of claims about violent video games.”

Chapter four, Grand Theft Chilhood,Â looks at the actual results of research with 1,254 middle school students in Pennsylvania and South Carolina. It completely rebuffs the views of the scaremongers and comes down firmly on the side of common sense. They came up with a surprise: “Boys who don’t regularly play video games were more likely than even the boys who played M-rated (adult) games to get into fights, steal from a store, or have problems at school.” There is much to this chapter and it does find that in some children there can be some behavioural correlation with violent gaming.

Chapter five, Why Kids Play Violent Games, contains what it says. Interestingly they found that violent games were often a catharsis and allowed the child to vent emotions. “In our surveys and focus groups, we did something that surprisingly few researchers have done before: we asked the children why they play video games-especially violent games.”

Chapter six, Sex, Hate, Game Addiction and Other Worries, looks at issues beyond violence. Once again the view is common sense and debunks much of what the doom mongers say.

Chapter seven, I’m from the Video Game Industry and I’m Here to Help, looks at the ESRB rating system, and others. It analyses their faults and suggests improvements. Overall “Given the constraints, we think that the ESRB has done a good job.”

Chapter eight All Politics Is Local analyses the hypocrisy of politicians and journalists who have attacked video games with no evidence to support their claims. This is classic: “On October 7, 2005, California governor Arnold Schwarzenegger signed a bill to prohibit the sale or rental of violent video games to minors. This is, of course, the same Arnold Schwarzenegger who made his financial fortune and launched his political career by starring in such violent movies as the Terminator series, Collateral Damage, End of Days, Predator and countless others of this genre. In fact, Schwarzenegger has recorded voice-overs for two Terminator video games. His years of profiting from media violence specifically aimed at teenage audiences belie his new-found political concerns about exposing children to violent media.”

Chapter 9 Practical Advice for Parents has a big go at the real problems created by handguns and (for games)Â concludes: “For most kids and most parents, the bottom line results of our research can be summed up in a single word: relax.”

Overall a very highly significant book in the development and acceptance of video gaming as just another (superior) form of popular media. Anyone involved in game design, marketing or senior management in the game industry should read Grand Theft Childhood. Obviously we need to protect our children, we also need to have a realistic view based on factual research. Not the emotive lies of a self publicist politician or journalist. 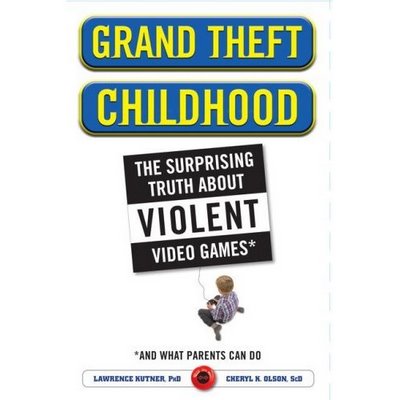