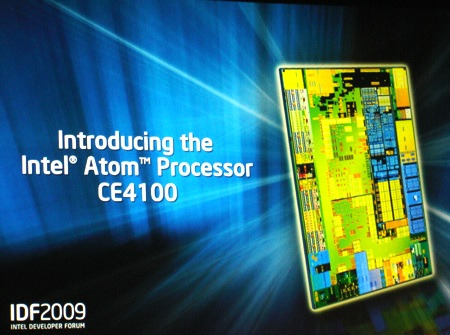 I have written about this before, how soon consoles and PCs will not be needed to play games because televisions will be smart enough to do the job on their own.

The Atom CE4100 is what is known as a “System on a Chip” (SoC). So adding just this one extra chip to any media device (a set top box or the television itself) puts a whole computer system inside it. One effect of this is to bring the internet to your television. And with the internet comes games. Another effect will be to hasten the demise of DVD and Blueray players, why store bits of plastic and cardboard in your house when everything ever recorded is available for instant streaming?

The humble television is about to undergo a revolution. The current LCD devices are just an interim technology, they are large and flat but they are over complex, use excessive energy and have poor picture quality. OLED technology, which is just hitting the market, is vastly simpler, uses a fraction of the energy and gives a far better picture. Because they can be manufactured by lithography they will become very cheap, they are also ideal for making 3D displays.

The low power usage of OLED (and of the Atom CE4100 and future such devices) mean that TVs will become truly portable, they will merge with the tablet netbook into one device. Also the low cost means there will be several televisions per person. Moving pictures will be everywhere in our lives.

For gaming this will accelerate our move onto the cloud. Not only will paper and cardboard distribution disappear, the dedicated gaming platforms will also go. Because every television will be a gaming platform, connected to the internet and with significant processing power of its own.

Interfaces will be interesting. Small screens can be the interface themselves by physical movement of the whole screen, as with an iPhone, a bit larger and we get into touch screen territory and big screens will use something like Natal.

Another way to look at what is happening is device integration. The television, computer, telephone, game console, camera etc etc are integrating into one device that will do everything.

Previous Post: Microsoft to buy Electronic Arts?
Next Post: Another milestone in the death of broadcast television