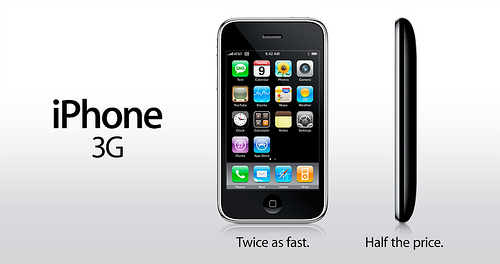 This could have as big an effect on video gaming as the Wii did, maybe more. Basically the iPhone (and it’s close cousin the iPod Touch) were not designed as gaming machines. They were designed as general purpose pocket devices with an emphasis on telephony and MP3, with a lousy camera and a brilliant gesture user interface.Â These limitations mean thatÂ games development on this platform presents unique challenges which require plenty of innovation in order to create good gaming experiences. However the sheer volume of iPhones being sold and the brilliant business model for developers make this one of the most exciting areas of the games industry.

The iPhone 3G sold a million units in its first weekend on sale and three million units in its first month. These figures areÂ only limited by how many Apple can make. App Store, the mechanic for selling non music content, hasÂ delivered 60 million programmes to customers for $30 millionÂ in its first month. 2 million downloadsÂ a day. 70% of revenue goes to the developer and 30% to Apple. Steve Jobs is understating the situation when he says: “This thing’s going to crest a half a billion, soon. Who knows, maybe it will be a USD 1 billion marketplace at some point in time… I’ve never seen anything like this in my career for software.”

As they ramp up production and introduce the iPhone 3GÂ to many new bigÂ markets the potential is simply phenomenal. Obviously they will be outsellingÂ every dedicated game playing machine. And with such a fantastic business model for getting product from developers to customers the game industry will see a veritable explosion.

One huge note of warning here. The Apple iPhone business model cuts out many of the functions of the publisher. The developer can easily deal directly with Apple. However it doesn’t cut out two of the most important publisher functions, finance and marketing. Finance will become more important as iPhone games get more complex and so cost more to make. Marketing is always essential and with thousands of applications competing to be downloaded from App Store it will be more critical than ever for anyone developing for this platform so asÂ to get their work noticed.

And, as ever, the thieves are on the job. Everything on the App Store can also be downloaded (stolen)Â for free from torrent sites. Apple will have to get a grip of this very quickly or the whole business model will collapse and nobody will bother with the iPhone any more. All Steve Jobs has to do is to look at the destruction of the PSP game market by thieves to know exactly what can very easily happen to his App Store.

And this marketÂ could have been Microsoft’s. But whilst Zune is excellent, Microsoft has been slow on their feet, lacking in technical initiative and invisible with their marketing. Being a “me too” manufacturer is no good when Apple are offering a scintillating package that is just so desirable.