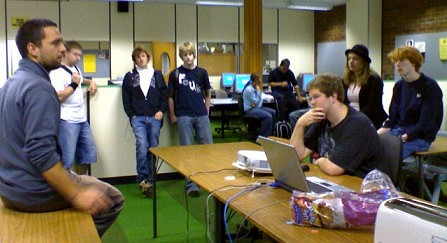 Cut scenes are mini videos put into games as a way of presenting information to the player of that game. To me they look like lazy short cuts to doing the job right. The advantages of a video game are interactivity, connectivity and non linearity. When you have a cut scene you throw all of this away. It is far better to do the job properly and get the information over in the game play. Why should we be dropping our standards down to those of an inferior media? It is interesting that Valve, one of the most highly rated game developers, don’t use cut scenes.

The QA department is a key component to the development of a video game. They graft through all the complexity to make sure that everything works as it should. Frequently they are looked on within the company as being lower down the food chain than the artists and programmers. This is something I never understood because it is QA that ensure the quality of the game. What I would like to see is a very greatly upgraded QA department. Renamed Polish, Focus and QA. Their job would be to polish the gameplay to get it to Super Mario Galaxy likeÂ level and to work continually with a whole range of focus groups to ensure that the game is what the public want. Obviously to do this would require a few more staff to work on some of the extra job functions. But the result should be commercially more successful games.

Outsource all your art to low cost countries. It is a long, long slog to create all that content, so why pay Western prices for it when it can be done just as well for a lot less money? Hollywood learned this lesson many years ago and so now 90+% of their animation is done this way. All that needs doing in the West is the storyboard, the characters, the setÂ and key frames. The long graft of converting this into a finished film is done in the Philippines, India, Vietnam and other places with theirÂ low labour costs. There are companies you can sub contract to, but the ultimate savings come with setting up your own art studio in one of these locations. Choose a place where there is already plenty of film animation and you will have a ready trained work force.

Design multiple languages into the game from the very beginning. Some languages take up more space to say things, some languages need different character sets and you can make life easier for your lip sync talent. If you take these into account then language conversion will be a lot easier and cheaper. As the installed base of platforms rises so quickly in so many markets it is essential to keep on top of the cost/benefits of language conversions. Very many more must be viable now than they were just a couple of years ago.

Frame-rate is more important than content. I have seen this so many times, overambitious game designers trying to put too much on the screen and do too much with it. So the frame rate drops to embarrassing levels. Our job is to entertain and that means suspending disbelief. Nothing brings that disbelief back quicker than a stuttering frame-rate.

Development crunch is just bad management. That is all there is to it. Mankind has developed management systems to control far bigger and far more complex projects than game development. Aircraft carrier and fighter aircraft design and manufactureÂ for instance. In fact games are still pretty small in management terms. The tools, techniques and training are out there to run game development projects properly. It is not rocket science.