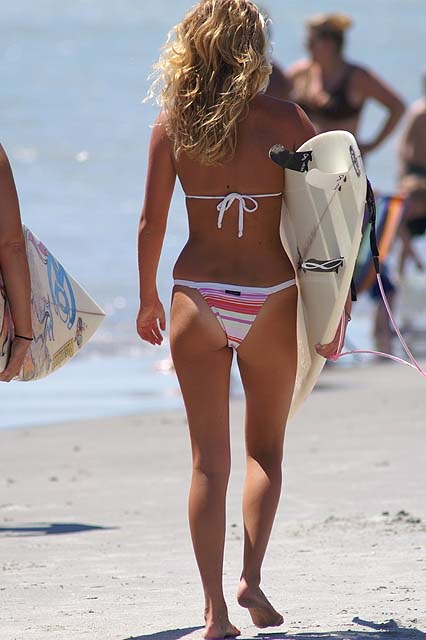 Some readers may think that I have gone mad talking about outdoor recreation. But don’t worry, the above are the pseudonyms of two bloggers who publish secret inside information and gossipÂ from the games industry. And they have oftenÂ beenÂ correct with their stories. With growing notoriety they are bothÂ obviously getting anonymous tip offs from inside the companies (mainly from marketing?). But some of those tip offs are leading them up the garden path. So what they publish can be wrong. I am a member of a private forum for industry professionals, some of whom have admitted that secret stuff has leaked out this way. And others have pointed out where these blogs can be very mistaken. So don’t take them as gospel.

Surfer girl can be found here. And here is a sample of the inside “information” that she posts:

1) Next year’s Star Wars MMO, not being developed by BioWare or Sony Online Entertainment, will launch simultaneously for PC and consoles alongside the debut of the first Star WarsTV series in fall 2009, of which the storylines of the game will tie into. Those Artistic Lucases already have a second online title planned that I’ve heard has nothing to do with Star Wars.
2) Road to Sunday – football + Grand Theft Auto = one bizarre game called This Is Vegas
3) Yeah, Boom Bloxis not only as amazing as it looks, but is this year’s best third-party Wii game. If you have a Wii and like puzzle games, Mark Mothersbaugh, and/or content sharing, I recommend playing this.
4) That Shrek game is a music game, an absurd music game.

weissmuller.The title that Randy Pitchford was hyping today a video game adaptation of Willa Cather’s One of Ours featuring a science-fiction twist and is set in the Halo universe.
barker.For the Blu-Ray release of There Will Be Blood, Backbone Entertainment is working on “an epic milkshake drinking adventure” that will feature the likeness of Daniel Day-Lewis, it will take up an estimated 5GB and feature at least twenty hours of slurping action, plus multiplayer. A demo of this will be available on XBLA and PSN.
scott. Fox Searchlight, Crave Entertainment and 7 Studios are collaborating once again for Juno: The Video Game, the most realistic teenage pregnancy simulation to date, for Playstation 3, Xbox 360, PC, and Wii. Crave could not get Ellen Page for the game, so in her place will be Jamie-Lynn Spears. For portable fans, a track-and-field title set in the Junoverse will hit DS and PSP.

UPDATE: Okay, so there’s apparently some truth to two of these stories, which proves I’m terrible at making up things.

UPDATE TWO: There is no Juno game, despite what people say.

She has a second blog here.

Skater boy has a much more professional looking site that can be found here. And here is a sample of his inside gossip:

– Someone told me that the Wii-exclusive Metal Gear title is somehow related to the Game Boy Color’s Metal Gear: Ghost Babel.

– Criterion’s Black 2Â will feature a full compliment of online multiplayer modes (with co-op a possibility), unlike it’s predecessor.

– I don’t know the current status of the game, but during Rockstar Vancouver’s first brainstorming sessions for a follow-up to Bully, one of the ideas they came up with was aÂ veryÂ similar title starring a female counterpart to Jimmy Hopkins. They (at least semi-seriously) referred to this game concept as, I kid you not, Tough Cookie.

– Luxoflux should be ready to show off their new game at E3 at the latest (it’s not another True Crime, thankfully).

– On a related note, Vigilante 8 Arcade is still coming to XBLA later this year.

– PROPE will be unveiling their original Wii game “before TGS.” Sega has optioned the publishing rights.

– Just Cause 2 looks much better than the first.

– Marvel Universe Online and Untitled Marvel Fighting Game may both be dead and buried in shallow graves, but Raven will still have Marvel: Even More Ultimater Alliance (tentative title) ready by next Spring.
Â

The nature of these things is that they will eventually be found out and their real identity revealed. But in the meantime their sites can be mildly amusing. As long as it’s not your secrets being revealed to the world.