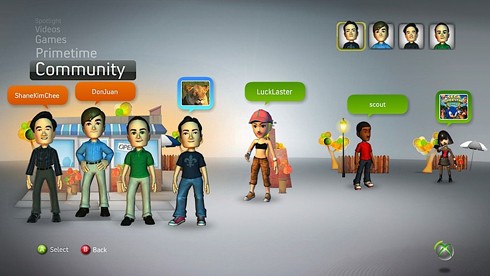 It is very important to understand that for Microsoft the Live service is the main event. All the Xbox consoles serve as are nominally pirate proof dongles to access Live with. In fact the original iteration of Live cost more to develop than the Xbox that used it did. And it has given Microsoft by far the best video gaming portal. Which has also served as a significant USP in the console wars as well as being a revenue stream for Microsoft and many publishers and developers. It is one of the most important entities in the whole of gaming.

With, quite literally, billions of dollars riding on it, the Live service needs to be excellent. And it need to be all things to all people. Microsoft have tweaked the service endlessly for six years, this was evolution.  But NXE today is different. Today is Revolution.

So why are they doing this:

The thing that has caught most people’s attention is the move to Avatars, which change the whole look and feel of the service. More important for me is that they have fixed two problems I have discussed on here in the past.

The first of these was the lousy database front end. Live was designed to host 200ish pieces of content but now has over 20,000. No wonder it wasn’t working very well. Amazon have no problem handling hundreds of thousands of items in an elegant and user friendly way. So it can be done. And this is a major part of the revisions. It will be great to see how this pans out.

The second problem was the weak social networking. Gaming and social networking are converging but one person doesn’t have time to maintain lots of different social networks. So social networking needs to be in the portal, not in the individual games. This is what Steam has done. Microsoft have now moved a long way with NXE to enhancing the community experience on Live with their Party system. But there is still a lot more to be done if they are going to compete with Facebook.

Overall NXE launch is the most significant event in gaming this year. It changes forever the nature of what gaming is and what a game machine does in the home. A lot of people at Microsoft will be watching nervously to see how well it works now they have released it on the world.