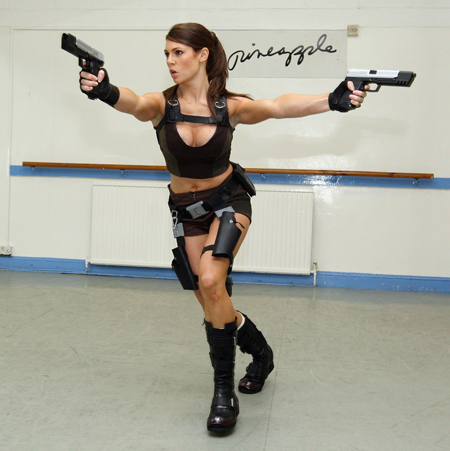 EIDOS/SciÂ  chose 23 year old Alison Carroll from Croydon to be the new “face” of Lara Croft to promote the latest upcoming version of Tomb Raiders. They make much of her attributes: “Sarah Hoeksma, Eidos Group Marketing Director says;â€œWith her tremendous athletic ability, dance training and striking look we feel Alison embodies all the assets required to be the live model of Lara Croft, and we are really looking forward to working with her.â€ ” But this has absolutely zero to do with the game. And what is Alison actually going to do?: “Alison will be lining up a host of international modelling assignments, starring in TV commercials, appearing on chat shows and is set to travel the globe over the coming months.” So her body is the asset that Eidos marketingÂ are using. 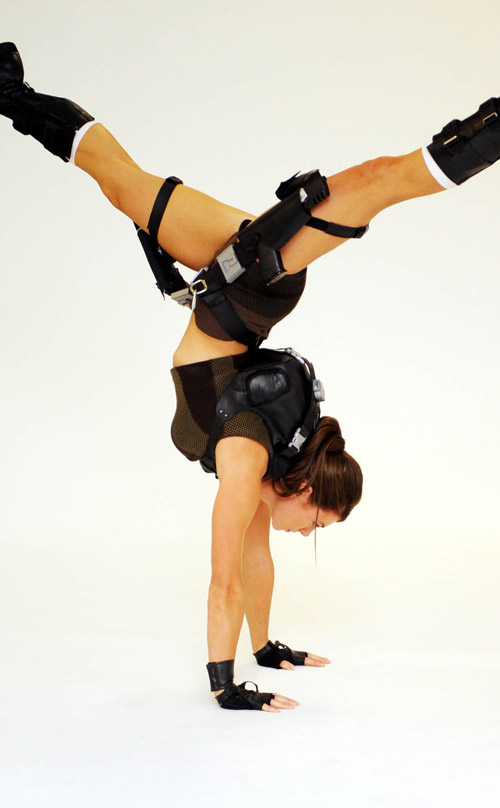 Alison was introduced to the press doing cartwheels wearing the iconic uniform. She said she had seen a sneak preview of the game and that it was “magical”. Then Alison was rolled out for prime time coverage in the main television channelsÂ who lapped it up hook line and sinker. At no stage has the issue of this being exploitative become an issue. Nobody is accusing Eidos of cynical marketing. 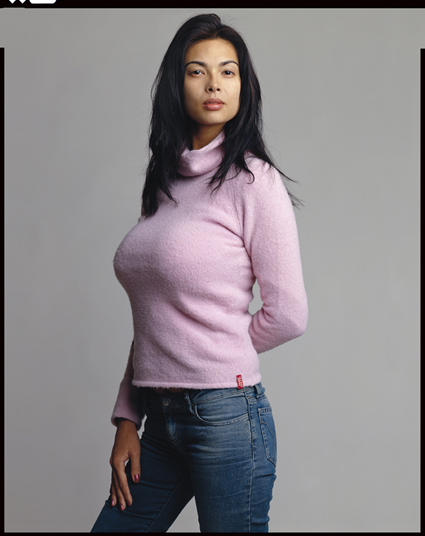 Then there is adult actressÂ Tera Patrick who has been made a “special producer” on the THQ game Saint’s Row 2. She isÂ is a bright, well educated lady who owns her own film production company, has a lot of experience directing and producing films and has been involved in two game development projects already, this is her third. She is a keen gamer, with a good knowledge of gaming and has a very high media profile globally. The core demographic of her fanbase is a close fit to the core demographic for the game and thereÂ are many opportunities for cross promotions between the two brands. She has been masthead publisher of Genesis magazine since 2003 so has a lot of experience of brand co-operation. She has considerable potential to add value to both the game development and the game publishing side of the project.

Yet, strangely, Tera’s appointment has been met with comment that it is exploitative and cynicalÂ when it seems to me that she has vastly more to contribute to a game than a golf club receptionist from Croydon. Certainly her first video was very good at getting the game features accross.

So I think that both marketing departments have done well here. They have succeeded in getting disproportionate global media coverage and their games will sell far better as a result. THQ are trying to build a little known brand up and are competing against the giant that is Grand Theft Auto. So they can afford to be more edgy, in fact it works strongly in their favour in building the brand image. Eidos, on the other hand, have an extremely well established brand, so need to play safe and conform to the existing brand identity. So they make a story about their girl doing cartwheels and going for SAS, firearms and archaeological training. Just enough bait to hook the press when combined with a camera friendly face and body.

In both cases the marketing use of the girls is very sophisticated and shows just how grown up and mainstream our industry is becoming. Which is the opposite of what some commentators say.

Previous Post: High street game retail – its inevitable death
Next Post: Is the Xbox 360 reaching the limit of its capabilities?