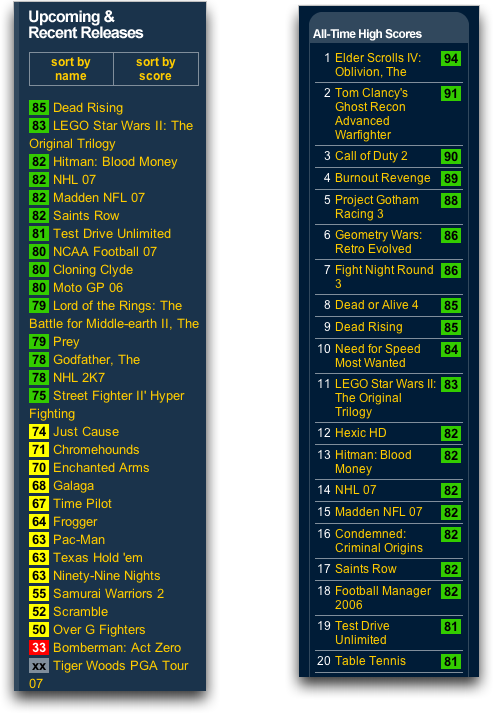 Since the very beginning of video gaming there have been reviews and to go with those reviews there have been scores. These have been useful tools for the public when coming to a buying decision, especially when games areÂ expensive to the point of beingÂ overpriced. And as a toolÂ for the publisher to get an independent (supposedly)Â view on the merits or otherwise of their game.

Of course scores have been the subject of abuse. By publishers buying a drink, or even more, for the reviewer or their boss and maybe even using the blackmail of advertising spend. By journalists being deliberately controversial to court publicity for themselves or their journal. I experienced this at CodemastersÂ when Edge gave Severance, Blade of Darkness two out of ten which was just pure sensationalism from them. Other examples are Amiga Power giving International Rugby ChallengeÂ 2% and Sega Zone giving Socket: Time Dominator 0%. These abuses from both sides reduced the credibility of an individual score for a game.

So it is especially useful if you can see a lot of different review scores for a game at the same time and so discount the obvious aberrations. This is what Game RankingsÂ does and I have used this countless times as a tool to help in my work. Most notably to prove to the directors of Codemasters that their game quality was slippingÂ in comparison to their direct competitors.

Then in 2001 Metacritic came along and changed the world. Firstly they convert all the review scores into percentages, then they average them to come up with one figure. (They also weight the average so more respected reviewers have more influence.) This single figure to represent a game is a very powerful thing and everybody in the industry is far more aware now of game Metacritics than they ever were of individualÂ review scores, they have become the standard benchmark for the industry.

In 2004 Jason Hall of Warner Brothers started putting Metacritic scores into contracts with game publishers in order to protect his brands. TheirÂ royalty payments became higher if the game received a low score. Publishers seized on this idea with their contracts with developers, whose income thereforeÂ no longer depended purely on sales, it also depended on Metacritic and therefore review scores and therefore game quality. This practice has now become widespread throughout the industry with stories of a million selling game netting it’s developer zero income because it’s Metacritic was below the contractual minimum.

Investors too have caught up with the importance of Metacritic and now a company’s stockÂ price will go down sharply when a new game gets a badÂ score (and vice versa). This can change the value of a company quite markedly on the basis of the magic number.

With all thisÂ it will come as no surprise that game developers now remunerate their staff partly on the Metacritic scores that their work produces. Bonuses are oftenÂ  directly tied to the score.

The simple fact is that there is a very strong correlation betweenÂ review scores and sales with only the occasional exception. “Activision Chief Executive Robert Kotick says the link was especially notable for games that score above 80%. For every five percentage points above 80%, Activision found sales of a game roughly doubled. Activision believes game scores, among other factors, can actually influence sales, not just reflect their quality.”

John Riccitiello, CEO of Electronic Arts, uses Metacritic as one of the most important measures of the performance of his company andÂ is unhappy when they go down, telling Wall Street analysts “Our core game titles are accurately measured and summarized by these assessments, and that is a very big deal.” He is determined to get the company average score over 80, which is a good target for everyone in the industry to have.

And finally, for consumers spending $60 on a game, Metacritic isÂ one of the best ways they can be sure to get value for money.Â