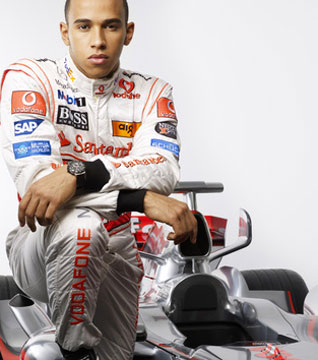 According to The Sun, the UK print equivalent of Fox News.

Hamilton will, obviously,Â be the “face” of a new game. It cannot be F1, as that is a very tightly held IP licensed to Sony. And it would, with the current state of play, be pretty stupid for EAÂ to limit a title to Sony platforms.

ThisÂ is very interesting relative to sporting performance. The current world champion is a Finn, Kimi RÃ¤ikkÃ¶nen and for the previous two years it was a Spaniard Fernando Alonso. But they don’t have Â£5 million game contracts. Lewis Hamilton was justÂ one of several exciting rookies this season. HeÂ was the person most prepared ever for an F1 drive and he had the best car on the grid, which is much more important in F1 than the driver. So he achieved good results and led the championship for the bulk of the season. Helped by other top drivers having difficulty with the transition to Bridgestone tyres.

The media in Britain went mad over him. The F1 programme on TV became a hysterical Hamilton event at every race. If they interviewed another F1 driver their questions would mainly be about Hamilton. It was pathetic. And the downmarket newspapers followed suit. To make things worse they did everything they could to stir bad feeling against Hamilton’s opponents. F1 in BritainÂ suffered the worst side of populist, nationalistic fervour.

HoweverÂ Hamilton failed to become world champion because he bottled it in the last two races, proving he really was just a rookie.Â And Kimi, in an inferior car, beat him. Because he is the better driver.

But the massive preparation for F1 that Hamilton has had makes him the marketeers dream. He is urbane, corporate, self confident, lucid and eloquent. He is also, obviously, very bright. This gets him the Â£5 million, even with his lesser driving credentials.

At Codemasters we had a similar thing with Colin McRae who we worked with for many greatÂ years. He only won the WDC once but his driving style made him a cult hero. However it ended up in many markets that Colin was more famous for being in the game than he was for his driving. In fact I have seen threads on American forums where they didn’t realise that he was a real person! This effect used to annoy Jim Darling who always said that we shouldn’t pay people to be in our games. They should pay us.

So it is with EA and Lewis Hamilton. Despite F1 being a global phenomenon, there are markets were EA is bigger. How many people play EA games in America, for instance, compared with the number that watch F1? So, if this deal is true, then it is a very clever move by Hamilton’s advisors. It means that his global brand will be built by two activities. And he will be paid massively for both!

Personally I think that our industry is big enough these days not to throw money away for other people’s IP. Nintendo wouldn’t do it. If EA gave me Â£5 million I would deliver them far more profit than Lewis Hamilton will and in a far more sustained way!! If Hamilton doesn’t getÂ a topÂ car next season he will be mid table. And there is nothing he can do about it.

So are you an F1 fan? What do you think of paying sports jocks to endorse games?